In the last blog we talked about different types of amines and their role in curing epoxies. We also discussed some of the various applications of amine cured epoxies. One of the major issues with amine cured epoxies is the formation carbamates; which is called blushing. In this blog we will discuss some specific types of amines that resist the problem of blushing. To review from the earlier blog:

Aliphatic primary amines are very reactive, and that allows the monomers of epoxy and amine to react at room temperature forming a thermoset polymer.  Aliphatic amines  make the curing of epoxies possible under a variety of conditions. The selection of amine and epoxy monomer components determine the final cured properties of the thermoset in their thermal, mechanical, and chemical resistance properties. The selection of the amine component is also critical for the process conditions such as pot life, gel time, time to full cure, and the initial viscosity and how it changes during the pot life.

Blushing of a room temperature amine/epoxy formulation is caused by 2 characteristics of these primary amines. They are very reactive and they are hydroscopic [ high moisture absorption], which then results in the formation of carbamate on the surface of the polymer otherwise known as blushing [or blooming]. The formation of carbamate on an epoxy coating is a serious condition that leads to a weaking of the epoxy adhesion and chemical resistance. The general chemical reaction is shown below 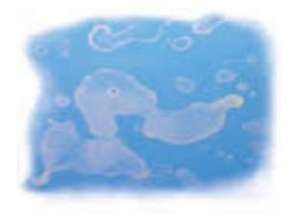 This blushing issue [seen above is an epoxy blue coating with white spotting] that is seen with primary amines for epoxy curing has led to the development of a number of chemical modifications to the amine that eliminate or reduce the blushing issue. Other types of aliphatic amine products are also used as curing agents for the epoxy that are less susceptible to the blushing issue.

Products have been developed that modify the primary amine by co-reacting it first with another component producing a higher molecular weight curing agent for epoxy. These adducts are typically proprietary to the manufacturer; and are typically co-reacted with bisphenol A epoxy along with a primary amine. The adducting chemical process reacts primary amines with a small amount of epoxy in such a manner that the epoxy functionality is completely consumed. The resulting amine adducted curing agent is now a higher molecular weight that gives the epoxy formulation substantially different properties.

A typical amine adducted epoxy material would have the general idealized chemical structure shown below.

The properties of these adducts vary a great deal, and they can be used in many adhesive applications, primer coatings, and topcoat applications. The major difficulty with adduct amine curing agents is that they are higher viscosity materials and need to be diluted with a plasticizer or solvent like benzyl alcohol. This increases their volatile organic component [VOC]; which is not desirable for environmental and health reasons.

These epoxy adducts reduce the moisture absorption of the primary amine by incorporating bisphenol A epoxy backbone into the curing agent. It also has the effect of reducing the reactivity of the primary amine making less reactive with moisture in the air. The pre-reacted epoxy in the backbone makes the curing agent more hydrophobic which greatly reduces the tendency to blush during curing,

Other uses for these adducts are in applications like, sealants, moisture resistant adhesives, electrical, electronics, and some composites.

Mannich Based Curatives and Phenalkamines

Mannich based epoxy curing agents are another form of amine adduct products that are available today for curing epoxy. Mannich based curing agents are the reaction product of aliphatic amine with a phenol, and formaldelyde. The resulting product not only has amine reactive groups but also have a built-in hydroxyl functionality that acts as an accelerator, which improves their cure rate, allows for low temperature cure [cold temperature curing of epoxy], good for high humidy curing of epoxy, improves moisture resistance, and resists the blushing phenomena.

Phenalkamines are a type of Mannich based curative where the phenol in the molecule is cardanol which is a product produced from CNSL. [Cashew Nut Shell Liquid]. Phenalkamines made with cardanol and any aliphatic amine plus formaldehyde combination are the choice curatives for cold weather/low temperature curing conditions.

Mannich based curatives and phenalkamines can be used for many applications such as pipe coatings, electronics, and other commercial applications. They are predominately used for applications requiring low temperature curing and corrosion resistance. This means they are used in industrials applications like marine coatings, concrete coating/adhesives, storage tanks, and other civil engineering applications which are outdoors.

Phenalkamines [in particular] do not have good color stability; they produce a dark brown coloring. There has been the development of low color phenalkamines that provide some better color stability. However, the color stability is best enhance by the application of a top coat that is light stable.

Polyamido amines have a number of advantages besides their resistance to blushing. They can cure epoxy, under humid conditions, provide moisture resistance, have good adhesion to a number of surfaces [particularly concrete]. They offer flexibility and toughness to coatings, and provide good acid resistance. Depending on which polyamido amine you select there is a wide range of reactivities with epoxy that can be obtained.

Polyamido amines do have some difficulties. They typically have a rapid drying time [compared to other amine chemistries], which can be a problem for applications requiring longer pot life. At the same time, they also will take longer to achieve their final cure properties; which is a problem if the application needs to be ready quickly for use.

We will continue the series with a focus on cycloaliphatic amines, polyether amines, and other unusual and specialized amine curing agents.